The Rental Relocation team scrambled to put together a temp housing plan after the Navy released a detailed Solicitation For Offers, or SFO. Within about a week’s time, RRI completed all the necessary paperwork for the Solicitation that included a detailed listing of nearby apartment properties where the Naval crew would live, as well as a plan for delivering all the necessary items for multiple apartments, including all of the furniture and housewares to linens, towels and kitchen cookware. 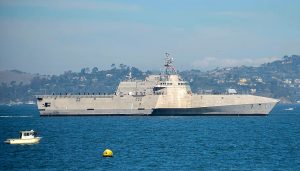 Upon learning that RRI was awarded the contract, InterLink and RRI President James Bilderback immediately flew to Seattle to meet with the Navy staff, and to oversee the successful move-in of the Sailors and Officers – all within a 4-day timeframe.

“That’s just the kind of personal service we provide, not only to our corporate clients, but also to the brave men and women of the military,” Mr. Bilderback said. “With every military contract we have won over the years, we have provided the highest level of fulfillment we can possibly offer. Serving them as best we can is our way of saying ‘thank you’ for their dedication to service on behalf of our country.”

USS Manchester (LCS-14) is an Independence-class littoral combat ship in the United States Navy. According to the Navy’s website, LCSs are high speed, agile, shallow draft, mission-focused surface combatants designed for operations in the littoral environment, yet fully capable of open ocean operations. As part of the surface fleet, LCSs have the ability to counter and outpace evolving threats independently or within a network of surface combatants. Paired with advanced sonar and mine hunting capabilities, LCSs provide a major contribution, as well as a more diverse set of options to commanders, across the spectrum of operations.